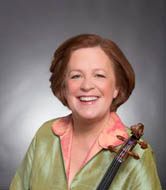 Dr. Lisa Tipton, violinist and co-founder of the award-winning Meridian String Quartet, has toured internationally and held residencies at Queens College, Bard College, and the Turtle Bay Music School. She has won distinctions from the Evian International Competition, Artists International, and Chamber Music America. As a devoted interpreter of new music, Dr. Tipton established the Made in America series at Weill Recital Hall and performed on the Interpretations series at Merkin Concert Hall. She performs regularly with Amici New York and the American Symphony Orchestra. Dr. Tipton’s recording of Ives’ violin sonatas was released in 2006 on Capstone Records. She earned a B.A. from Cornell University, an M.A. from the Aaron Copland School of Music at Queens College, and her D.M.A. from the CUNY Graduate Center.