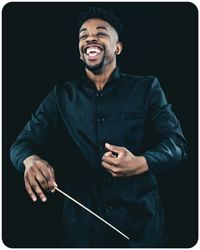 Emerging young conductor and Winner of the Respighi Prize in Conducting, Jonathan Taylor Rush brings passion, unique interpretation, and refreshing energy to the orchestral experience. Jonathan is known for bringing the music he conducts, to life, as he spends time with every detail in the score, and clearly communicates these details to those under his baton.

As a conductor, Jonathan has served as Music Director of the Buckeye Philharmonic Orchestra, an orchestra on the campus of The Ohio State University. In 2017, he became the conducting fellow for the Baltimore Symphony Youth Orchestra, and in 2018, Jonathan was also named a Project Inclusion Conducting Fellow with the Chicago Sinfonietta, which was followed by an appointment to Assistant Conductor in 2019. As Assistant Conductor of the Chicago Sinfonietta, Jonathan worked alongside music professionals and fellow conductors to help, “redefine classical music,” by changing its face, and encouraging diversity in Orchestras across the United States.

Jonathan made his International conducting debut with the Nairobi Philharmonic Orchestra and Dance Centre Kenya, for the first ever performance of Tchaikovsky’s Nutcracker Ballet with a live orchestra. As the 2018 winner of the Respighi Prize in Conducting at age 22, Jonathan made his professional orchestra debut with the Chamber Orchestra of New York, in the legendary Carnegie Hall. Jonathan has since returned to Kenya to continue his relationship with Dance Centre Kenya, and has conducted multiple orchestras throughout the US including additional performances with the Chamber Orchestra of New York, and a debut with the Baltimore Symphony Orchestra.

A versatile musician, Jonathan also has a strong Gospel, Jazz, Soul, and R&B music background. Jonathan has performed with various jazz ensembles and was a lead vocalist with the Ohio Show Band. As a Gospel musician, Jonathan serves as the Minister of Music at Ebenezer Temple UHCA in Hartford, CT and serves as the Director of Music for the New England District of the United Holy Church of America, where he oversees the music departments of 14 different churches.

Jonathan’s current mentors and teachers of conducting are Marin Alsop, Mei-Ann Chen, and Joseph Young. Jonathan received a Bachelor of Music Education degree from The Ohio State University, and a Master of Music degree in Orchestral Conducting, from the Peabody Institute of the Johns Hopkins University.