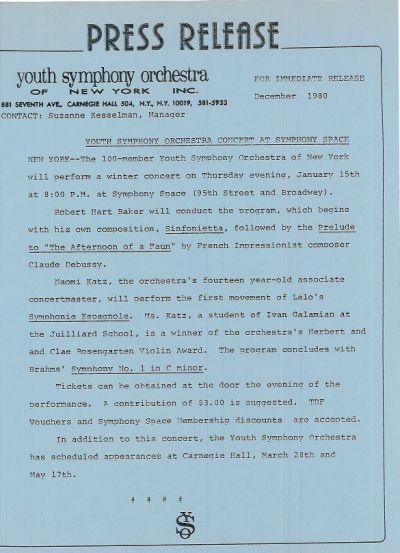 Sponsored by the Heckscher Foundation for Children and Manufacturers Hanover Trust Company, the orchestra inaugurated a series of Community Concerts in Brooklyn, Queens, and the Bronx to provide additional free concert-going opportunities for New Yorkers.

Lorin Maazel was the guest of honor at October corporate musicale.

New York Times:  “Mr. Miller’s neat balancing of the ensemble as it accompanied a season Stefan Reuss in Saint-Saëns’ Cello Concerto in A (Op. 33) augurs well for his stewardship.  The highly successful account of Chausson’s ‘Poème’, over which Mr. Scecchiatano presided, found the orchestra provided sensitive and stylish support for the soloist, the violinist Daniel Lewin.”  (Theodore W. Libbey, Jr.)

Chamber Music Players (later “Program”) was launched under the direction of clarinetist Alan Kay.  The purpose was to give the orchestra members a chance to study works outside the symphonic repertory.