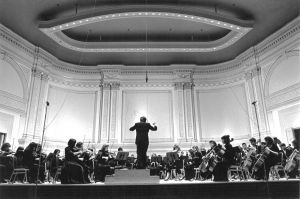 June LeBell of WQXR-FM was Mistress of Ceremonies for Concerto Competition finals, funded by a grant from the New York Times Company Foundation.  She says, "The New York Youth Symphony is a window to the future.  It lets in all the light, exuberance, talent and brilliance of tomorrow's finest musicians."

In February, ensembles of the Chamber Music Program initiated its annual performances at the National Arts Club in Gramercy Park.

NYYS is awarded with the Congressional Proclamation