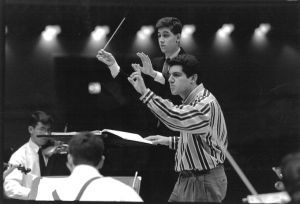 Under the direction of New York Philharmonic music director Kurt Masur, members of the NYYS orchestra demonstrated the use of their instruments for the 500th Young People's Concert at Lincoln Center in January, and again in March when former NYYS music director Leonard Slatkin performs with the Philharmonic.