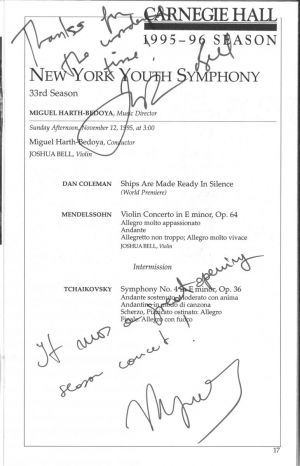 When Leonard Slatkin is delayed in Washington, D.C., by the ‘Blizzard of '96’, Miguel Harth-Bedoya leads the New York Philharmonic in Lincoln Center's Avery Fisher Hall in his place.  The performance included Richard Danielpour's Toward the Splendid City.  The orchestra joined the audience in applause.  Mr. Slatkin appeared for the final piece on the program.

The Jubileren Chorus, based in Delaware, makes its Carnegie Hall début with the orchestra in a performance of Beethoven's Ninth Symphony.