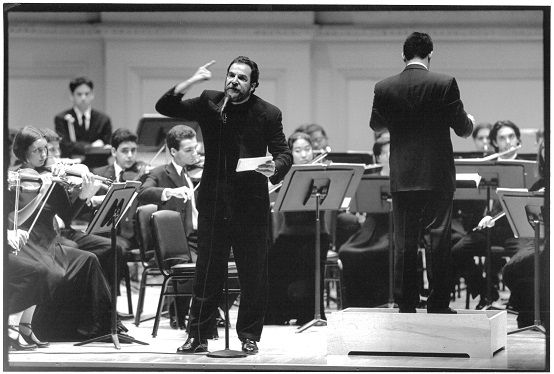 Maestro Kurt Masur presented The Theodore L. Kesselman Award for Arts Education to Phyllis Mills at the annual benefit performance in December.  At the same concert, Martin Bookspan was master of ceremonies, and flutist Eugenia Zukerman performed Mozart's Andante for Flute and Orchestra in C Major.

The New York Times:  " . . . these concerts have always attracted listeners who simply want to hear exciting, unjaded music making, and this one provided it.”  “The youths in the orchestra range in age from 12 to 22, and their level of technical and musical accomplishment is remarkable.”

“Miss Weilerstein played . . . with boldness, assured technique and vibrant tone.  And the orchestra under Mr. Harth-Bedoya was with her all the way."  “The New York Youth Symphony has a good track record of presenting young talent.  At its very first concert a 17-year-old violinist named Itzhak Perlman was the soloist.”  (Anthony Tommasini  3-4-97)