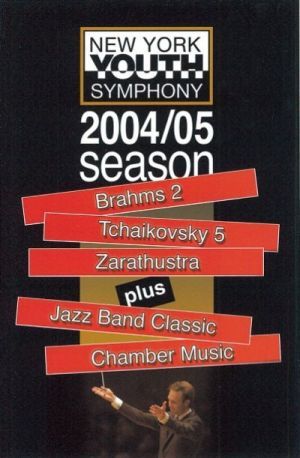 The opening concert of the season featured Paul Haas in his third season as music director conducting the première of Joshua Penman’s Songs the Plants Taught Us, Prokofiev’s Second Violin Concerto, and Brahms’s Second Symphony.  Glenn Dicterow, concertmaster of the New York Philharmonic, is the guest soloist.  The Juilliard School and its president, Joseph W. Polisi, were honored with the tenth presentation of The Kesselman Award for Arts Education.  Eugenia Zukerman was the award’s presenter; Elliott Forrest served as the presentation’s master of ceremonies.

The New York Times:  “One of the best ways to reconnect with the adventure and excitement of works that have long been repertory staples is to hear them performed by eager and unjaded young musicians who are truly thrilled to be playing them.  This always happens at the concerts by the excellent, highly skilled and hard-working New York Youth Symphony.  . . . the orchestra also assures adventure by playing the premiere of [a] short work by a young composer at every concert.”  (Tommasini 3-4-05)

The New York Times:  “ . . . before the Russian fireworks began, the orchestra, made up of 108 musicians from the metropolitan New York area, performed something fairly common for this ensemble but very rare for most youth symphonies:  a world premiere.  Through its essential First Music series, the orchestra has commissioned works from 62 young composers.  It’s hard to imagine a better way to support new voices while at the same time building contemporary music into the regular diet of emerging musicians.”  “The concert concluded with Tchaikovsky's Fifth Symphony, cloaked in mystery where appropriate and exultant on the right occasions.”

The New York Times:  “The impressive New York Youth Symphony, under its dynamic conductor Paul Haas, ends its season with a typically ambitious program.  The violinist Anne Akiko Meyers is the soloist for Bruch’s Violin Concerto No. 1. The program also offers Brahms's “Tragic” Overture, Strauss’s formidable “Also Sprach Zarathustra” and the premiere of Judd Greenstein's “Today and Everyday.” Every concert includes the premiere of a work by a younger composer, which says much about the artistic principles of this admirable orchestra.”  (Tommasini, Chief Music Critic  5-27-05)

The New York Times:  “. . . the Youth Symphony also promotes young professional musicians in the early stages of their careers.”  The program “was led by the group’s capable music director, Paul Haas, who drew excited and admirably polished playing from the orchestra in both the Strauss and the Bruch concerto.”  “There are clearly players in this orchestra bound for professional careers in music . . . “  (Eichler  5-31-05)

The New York Youth Symphony was presented on 6-17-05 with its fourteenth award “for adventuresome programming of contemporary music” at the annual conference of the American Symphony Orchestra League in Washington, D.C.

Jazz Band Classic opens its third season on 12-7-04 at the Church of the Good Shepherd on West 66th Street near Lincoln Center with “The Great Jazz Pianists.”  Eric Reed is the guest soloist.

“The Music of Benny Goodman” is the theme of this performance under Ryan Keberle’s direction on 5-10-05.  Clarinetist Victor Goines is the featured soloist at the Church of the Good Shepherd.

The Chamber Music Program concludes its 23rd season in Weill Recital Hall of Carnegie Hall on 4-25-05.  Daniel Phillips of the Orion Quartet is the featured artist as part of the Mentorship Program.

The Making Score program for young composers features among its guest lecturers Pulitzer Prize-winning composers Christopher Rouse and Stephen Sondheim.  The season-end performance on 5-23-05 at the Rose Studio of Lincoln Center is highlighted by the presentation of short works of 13 participants of the Program.  The works are performed in a collaborative effort by musicians among the other programs, including orchestra, chamber music, Jazz Band Classic, and Apprentice Conducting.

Symphony  Magazine (Sep-Oct 2004 issue):  “The New York Youth Symphony’s Making Score program offers hands-on experience in the creation of music, to unleash the composer within.” . . . “Making Score, a four-year-old project of the New York Youth Symphony that offers musicians ranging from pre-teen to 22 –some of them, but not all, members of the orchestra– broad exposure to techniques of composition, orchestration, arranging, and creative collaboration with performers.” . . . “Though unprecedented in the annals of orchestra education programs, Making Score is almost ‘business as usual’ for the New York Youth Symphony, part and parcel of its remarkably broad mission to develop young talent while pushing the boundaries of the repertoire.” . . . “During the last two decades, no youth orchestra in the country has been more relentlessly committed to generating new music than the NYYS.” . . . “This year’s session offered a fascinating window into the different orientations that established composers have towards the orchestra.” . . . “ASCAP’s Fran Richard, who sits in regularly on the Making Score sessions, at one point told me [the writer], ‘You can be in a Ph.D. program in composition and not be challenged like this.’ ”