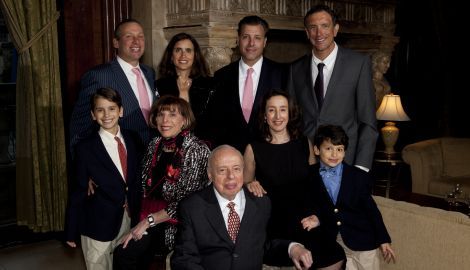 The Johanna and Leslie Garfield Award for Arts Philanthropy was established in 2015 to recognize individuals who have provided leading support to arts organizations in New York and beyond. The award is named for the Garfields, who hail from the NYYS founding family and both of whom continue to serve on its Emeritus Board.

Jo Garfield was born into a family of music makers and music lovers. Her mother Clae, a founder of the NYYS, sang and played the piano. Her father Herbert was an excellent self-taught violinist whose legacy to the orchestra is the underwriting of the string chairs. All her father’s family and their children played instruments; so many, in fact, that at one time there was a family orchestra. She and her brother Frank began piano lessons early and developed a deep love of music. Some of Jo’s fondest childhood memories are of sitting in the family box at Carnegie Hall, where in 1963 she first heard the NYYS play. Her other musical interests include the New York Philharmonic, the Tanglewood Festival, Broadway musicals, and collecting and playing old popular sheet music. Jo is a writer who’s had numerous essays and articles published in The New York Times, Newsday, McCall’s, the Paris Review, and many others. She is the author of two books, a member of PEN, and Co-chair of the National Arts Club Literary Committee.

Leslie developed his passion for music in public school, where a part of the curriculum was listening to classical music. He and Jo met at the University of Wisconsin, and he was with her at that memorable 1963 NYYS concert. Both were willingly recruited for the board by Clae. Les became the President for many years, and then Chairman. He has been instrumental (no pun intended) in raising a lot of money for the orchestra, and has enthusiastically supported all their programs.

In his non-NYYS life, Les is the founder of Leslie J. Garfield and Company, a real estate firm now run by his son Jed. With Jo, Les is an avid collector of 20th- and 21st-century prints, and they have had several museum shows. He is on the boards of the MFA in Boston and the Chazen Museum in Madison, and is a longtime member of the Print Acquisitions Committee at MoMA. He is Co-chairman of the International Print Center of New York. The couple live in New York City and have three grown children: Clare (Peter), Jed (Karen), and Cory; and two grandchildren, Clay and Charlie.