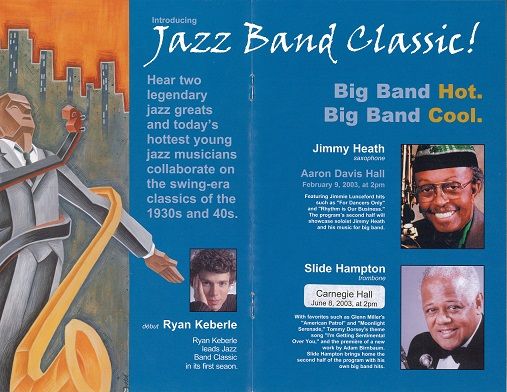 Paul Haas, a conducting graduate of Juilliard and recently the Music Director of the San Antonio Youth Orchestra, was appointed Music Director.  Ankush Bahl was made Assistant Conductor.

The opening concert of the 40th Season featured Alan Feinberg performing MacDowell’s Second Piano Concerto.  (André Watts, who had been scheduled for this performance, was taken ill and could not perform.)  Leslie and Johanna Garfield were the honorees of the annual benefit, and former music director David Alan Miller, now the conductor of the Albany Symphony Orchestra, presented them onstage with the Theodore L. Kesselman Award for Arts Education.

The New York Times:  “A fresh enthusiasm is only to be expected from these gifted young performers, but when last heard some years ago, they also brought considerable polish even to difficult works.” (Oestreich 12-6-02))

The New York Times:  “The remarkable concerts that this orchestra plays every season are a tribute to both the enthusiasm and the polish that its young musicians bring to the task and to the focus and professionalism that the orchestra’s music directors develop in them.”  (Kozinn  2-14-03)

The New York Times:  “In the Barber Violin Concerto, which filled out the first half of the program, the orchestra matched and amplified the lush, shapely sound that Giora Schmidt brought to the solo line.  The other big work on the program, the Sibelius Second Symphony, demanded something very different –wintry heft and a large measure of melancholy– and

Mr. Haas and his players created that work effectively and affectingly.”  (Kozinn 2-19-03)

On 5-14-03, WQXR-FM and The McGraw-Hill Companies’ Young Artists Showcase featured the New York Youth Symphony in performances of Philip Rothman’s Morningside Run (commissioned by the orchestra and given its première on 12-8-02), the Barber Violin Concerto with soloist Giora Schmidt (who made his Carnegie Hall début with the orchestra on 2-16-03), and the third movement of Tchaikovsky’s Sixth Symphony, all conducted by Paul Haas.  The broadcast was repeated in September.

The New York Sun:  “. . . America’s best youth orchestra.”  “The group’s previous conductor, Mischa Santora, left old-school precision and depth with the band; Paul Haas is bringing it electricity.”  In referring to the season’s conclusion, a performance of Bartók’s Concerto for Orchestra, the reviewer wrote, “It was as finely tuned and stirring a performance of this piece as New York has heard in some time.”  “The New York Youth Symphony now offers programs for young composers, chamber musicians, conductors, and jazz players.  . . . With such depth to its programming, it’s clearly the city’s preeminent training institution.  But it’s also a great artistic vehicle.  Many of the professional musicians trolling the city’s top stages got their start in this band, after all.”  “Parents with musical children should certainly consult the group’s Web site for program information; and any music lover in search of a new brand of concert-going elation might do equally as well with a subscription.”  (Baer 6-3-03)

“Jazz Band Classic” was launched with the appointment of Ryan Keberle as its first Director and with the first auditions to identify the 17 members of the swing-era band.

In February 2003, Jazz Band Classic makes its formal début in Aaron Davis Hall on the campus of the City University of New York in Harlem with director Ryan Keberle, a jazz trombonist, and the legendary saxophonist Jimmy Heath as soloist.

Jazz Band Classic made its Carnegie Hall début on 6-8-03, featuring the 17-member ensemble in music of the jazz trombone with trombonist Slide Hampton as guest soloist.  A near-capacity crowd cheers.  During the pre-performance rehearsal in Carnegie Hall, trombonist Michael Dease was presented with the first JBC Director’s Award for Commitment and Achievement.”  Executive Director Barry Goldberg was celebrated on his birthday that same day with the band’s surprise performance of a jazz rendition of “Happy Birthday.”

A NYYS woodwind quintet, at the invitation of The NYC Department of Cultural Affairs, participated in the first anniversary ceremonies at Ground Zero on 9-11-02.  The performance was part of the reading of names of those who died as a result of the events of 9-11-01.

The Chamber Music Program closed its 21st season with an April performance in Weill Recital Hall and featured cellist David Geber, a founding member of the American String Quartet, as a mentor-participant with a Program string quintet.

The New York Youth Symphony is presented on 6-20-03 with the ASCAP Leonard Bernstein Award for Educational Programming at the American Symphony Orchestra League’s annual conference in San Francisco.

Barry Goldberg celebrates 20 years as Executive Director, as the Board of Trustees honors him at a meeting on April 3rd.