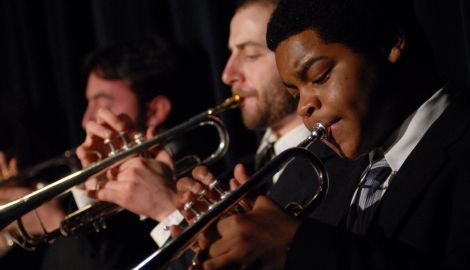 On December 4th, 2011, the New York Youth Symphony’s Orchestra program opened the season with a concert at Carnegie Hall, featuring the talents of mezzo-soprano Eve Gigliotti, and lead by music director Ryan McAdams. The program included Bernstein’s Jeremiah Symphony, Tchaikovsky’s Symphony No. 4, and the premiere of the First Music commission Word for Word, by Ted Hearne.

The second concert in the Orchestra’s season took place on March 11th, 2012, and featured the young cellist Jay Campbell. The concert put forward a varied repertoire that spanned from the classical to the contemporary, including Mozart’s Overture to La Nozze di Figaro, Bartok’s Concerto for Orchestra, and the premiere of the First Music commission That Blue Repair composed by rising composer Chris Rogerson. The concert was met positively in reviews by the New York Times critic Zachary Woolfe.

The final concert for the orchestra program rounded out the season in style, premiering the First Music commission by Elizabeth A. Kelly, performed by the innovative Horn quartet Genghis Barbie, as well as Mahler’s powerful Symphony No. 5. The performance with Genghis Barbie was sponsored by the Roy and Shirley Durst Debut Series. The concert received favorable press from New York Times critic Anthony Tommasini, who writes:

The opening concert for the Jazz Program’s 10th season, entitled Basie and Beyond, was dedicated to the work of Count Basie and his famed arrangers, such as Frank Foster, Neal Hefti and Sammy Nestico. The concert featured the virtuosic trumpet playing of Marcus Printup as well as the First Music Jazz commission Figure it Out by Scott Ninmer, under the direction of Matt Holman.

Jazz Meets the East, the second concert in the Jazz Program’s 10th season, explored the influence of music from around the world on the classic big band sound. In addition to the music by Billy Strayhorn, Tommy Dorsey, and Dave Brubeck, the band premiered the First Music commission Upon Seasons Turn by accomplished composer Christopher Zuar. Experimental and talented saxophonist Donny McCalsin played with the group.

The concluding concert of the Jazz program’s 10th season, Sounds from the City, featured the legendary talents of vocalist Ann Hampton Callaway. The program, a tribute to the songs and sounds inspired by New York City, featured hits by Duke Ellington, George Gershwin, and Frank Sinatra, as well as a big band salute to Broadway, and the First Music commission The Adjacent Possible by Evan Weiss.

The Chamber program, under the direction of Lisa Tipton, had three concerts in April, 2012. The ensembles ranged from duets to quintets, with a variety of instrumentation, covering music from the Baroque to the Contemporary. The final concert, held at the Weill Recital Hall at Carnegie Hall, featured a performance by Wolfram Koessel of the American String Quartet, and the First Music Chamber premiere of Eric Nathan’s Threads, performed by the student group and 2011-2012 Director’s Award recipients Piavioclarello.

The annual Composition Date features work done throughout the year by the Composition program students, performed by members of the Orchestra, Chamber and Jazz Band programs.

As a part of the program, workshops are held featuring a great number of talented and renowned composers and orchestrators. Orchestration projects are performed by the American Composers Orchestra, who does a reading in late April. Workshop lecturers include David Krakauer, Michael Truesdell, and David Lang, among others.

Ryan McAdams concluded his five year tenure as music director of the New York Youth Symphony Orchestra at the last concert of the season at Carnegie Hall on May 27th, 2012. In addition to their programmed repertoire, students, artistic staff, and trustees of the Orchestra paid tribute to the McAdams’ hard work with an arrangement of Puccini’s “O mio babbino caro” featuring concertmaster Samuel Katz as soloist.